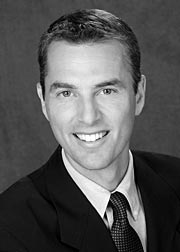 Thomas O'Toole's practice focuses on counseling businesses, professionals and individuals involved in a wide range of real estate and business transactions and as well as legacy/estate planning/trustee services and representing clients, with our litigation team, in a wide array of disputes and litigation.

For many years, Mr. O’Toole has led our Dental and Medical practice group and assisted hundreds of doctors in a multitude of business and real estate matters such as practice start-ups, purchases and sales, real estate leasing/purchases/sales, corporate and partnership, employment/associate agreements, space sharing agreements as well as work-outs and dispute resolution.

Prior to joining COFO in 2004, Mr. O'Toole was in-house counsel for a nation-wide escrow/title company and was an associate at the respected Walnut Creek law firms of Alborg, Veiluva & Cannata, and McNamara, Dodge, Beatty, Slatery & Pfalzer where he practiced business and real estate litigation and transactions on behalf of individuals, professionals and business entities.

Mr. O'Toole is a 1999 “with distinction” graduate of the University of the Pacific McGeorge School of Law, where he served at the Editor in Chief of the Transnational Lawyer, an international business law journal, and authored "The Long Arm of the Law" - European Merger Regulation and Its Application to the Merger of Boeing and McDonnell Douglas, 11 Transnat'l Law 203. At McGeorge, Mr. O'Toole obtained the American Jurisprudence Award for Corporate Taxation.

Mr. O'Toole received his Bachelor of Science degree in Finance in 1990 and his Masters of Business Administration in 1993 from California State University at Long Beach. After graduate school, Mr. O'Toole worked extensively in the real estate industry advising property owners regarding investment, development and management. He obtained his California real estate broker's license in 2002 and maintains it to this day.

For years, Mr. O'Toole was a member of the City of Walnut Creek Transportation Commission, the Contra Costa County Bar Association and the Contra Costa County Association of Realtors where he was the long time Legislative Committee and Local Candidate Recommendation Committee Chairs. As well, he is admitted to practice in the U.S. District Court, Northern, Central and Eastern Districts of California, and U.S. Court of Appeal, Ninth Circuit.

Mr. O’Toole resides in the East Bay and enjoys all sorts of outdoor activities including running, swimming, rowing and a good sunset stroll on the beach or vigorous hike in the hills.

Mr. O'Toole can be reached by e-mail at: totoole@cofolaw.com.